And this is the testimony of John, when the Jews sent priests and Levites from Jerusalem to ask him, “Who are you?” He confessed, and did not deny, but confessed, “I am not the Christ.” And they asked him, “What then? Are you Elijah?” He said, “I am not.” “Are you the Prophet?” And he answered, “No.” So they said to him, “Who are you? We need to give an answer to those who sent us. What do you say about yourself?” He said, “I am the voice of one crying out in the wilderness, ‘Make straight the way of the Lord,’ as the prophet Isaiah said.” (Now they had been sent from the Pharisees.) They asked him, “Then why are you baptizing, if you are neither the Christ, nor Elijah, nor the Prophet?”

John answered them, “I baptize with water, but among you stands one you do not know, even he who comes after me, the strap of whose sandal I am not worthy to untie.” These things took place in Bethany across the Jordan, where John was baptizing.

Today we can learn from two humble men. They both have the same name. Do you know what it is? Yes, John. John the beloved disciple of Jesus, the author of the Fourth Gospel, and John the Baptism, about whom Jesus Himself said, that no one born of women is greater than him.

John the beloved disciple, he wrote the most elevated Gospel account. He had this wonderful gift to remember so many of Jesus’ speeches. And you know what, – he didn’t even mention his name in his account.

The whole focus of his Gospel account is on Jesus. It is about Jesus, the light of the world, about Jesus, the only begotten Son, who has revealed to us the Father. Everything is written about Jesus “so that you may believe that Jesus is the Christ, the Son of God, and that by believing you may have life in His name.”

What a humble testimony from the man whom Jesus loved so much, and who with Peter and James were the closest disciples of Jesus. Nothing about himself. Everything about His Lord and Master.

Then John the Baptism. He got famous. The whole Judea went to him to hear his preaching and to get baptized by him. He was an exceptional man, and everyone realized that.

That’s why many believed him to be either one of the prophet’s or even the Christ himself. What about John the Baptist? He could have easily got carried away by his fame. But even when asked who he was, he confessed, and it’s emphasized twice, that he confessed and didn’t deny that he wasn’t the Christ, but only His messenger. These two humble men. Two exceptional examples who could have indeed boasted about what God has done through them, but instead, they were tirelessly pointing to Jesus.

Dear Lord, please, grant us humility like theirs! You see, we have so much in common with John the Baptist. So much. That’s why we can look at our today’s reading and learn how to be who we are meant to be.

“There was a man sent from God, whose name was John.” We could say that there are people sent by God, and they are called – the Church. We should never forget that we are not only called, but also sent by God Himself.

He has chosen us, even before we were born, and He has called us out of darkness into His marvelous light. Remember, no one can come to Jesus, unless the Father draws him. If you are here, it is God’s work. It is by God’s grace alone, and it is a miracle.

And He has sent us. This is what it means to be a Christian, – you are both called and sent. It is not about having heard about Jesus, or having your own faith, or living according some Christian values, whatever it means.

It is about being on God’s mission, being sent by God. For the very word ‘mission’ comes from Latin and means ‘sending’. So, what are we sent to do? “He came as a witness, to bear witness about the light, that all might believe through him.”

That’s it. We, too, are sent to bear witness about the light, about Jesus Christ. People so often misunderstand the Church’s message, they think that it is one more teaching about how to be good. Not at all.

Remember, the main qualification for the apostles was that they were … remember? Eye-witnesses of everything that Jesus did and said. They were not sent to teach people how to earn God’s favor or how to be nice.

They were sent to witness what the Triune God the Father and the Son and the Holy Spirit has done, what He has accomplished so that we could again enjoy true fellowship with Him.

We are sent to witness that the Word became flesh and dwelled among us. That He carried the sin of the world on the cross and died the death that we deserve. That He rouse again, and have emerged victorious over death.

And that He offers forgiveness of sins and eternal life to everyone who repents of their evil ways and desires to receive His gifts. Similarly, as the apostles, we too are Jesus’ witnesses. We are not teachers of moral principles, even if the Bible, indeed, contains the wisdom of God, we are first and foremost witnesses of Jesus Christ.

We may be tempted to be attractive and to be loved by the society around us, hoping that if only we could please them, then maybe one day they would become interested in Jesus as well. Let’s resist these temptations!

Look at John the Baptist! Did he tried to gather disciples for himself? Did he tried to please people and to tell them nice things so that they would like him and become his followers? You won’t find any of this with John.

That was his testimony when Jewish leaders came to him. He confessed and did not deny, but confessed: “I am not the Christ.” It was not about him. And today our message and whatever we do in our community should not be about us.

It should be about Jesus. It should help people to see Jesus, to hear Jesus, to come to Jesus, to follow Jesus. Jesus, not us. It is much easier to give testimony about what Jesus has done in my life, or what we have done for Him.

And it wouldn’t be the worst thing to say, as it is truly wonderful what He has done for us. There are a lot of miracles in our congregation alone. But we are not called to witness about ourselves.

Either of two John’s could have witnessed about what Jesus has done for them and through them and that would really be something. But they didn’t. What did they do? They pointed to Jesus, the light of the world.

The Lamb who takes away our sins. They pointed to Jesus who alone is the way and the truth and the life. Because no one can come to the Father through us, but only through Jesus. Dear Lord, help us always to witness about you, and not about ourselves!

Then we can read that John said something that makes shivers run down the spine. “Among you stands one you do not know … he who comes after me, the strap of whose sandal I am not worthy to untie.”

This is our message to the world that dwells in darkness. “Among you stands one you do not know.” It is so true. Much more today, than it was when John the Baptist said these words.

Jesus Christ, the Son of God, the light of the world, the only way to the Father, He stands among us and the world doesn’t know Him. Or better, the world doesn’t want to recognize Him. They prefer the darkness of sin over the light of God. When John the Baptist said these words, Jesus wasn’t far away. But no one knew yet who this carpenter was. Today we have very different situation.

The Gospel message has been translated into more than 3000 languages. Therefore, it is accessible to every human being, if not in their first language, then in a language that they understand.

We have the situation which indicates that the return of Jesus Christ may not be that far away. For the first time in the history of humanity the Gospel about Jesus is being proclaimed to all nations.

How many TV and radio programs witness about Jesus? How many books are available? How many information is accessible online? How many sermons you can find with just a few clicks on your computer or mobile?

Never since the first century we have had so much information about the Bible and all the events recorded in it. Studies in ancient languages, archeology, historical studies of ancient civilization, all these efforts have contributed to confirm the message entrusted to us. It is all here, available for everyone.

People should be streaming to the light. With great crowds. They should be fleeing from darkness and turning to the true God and His Son Jesus. There is no excuse that ‘I didn’t know about Jesus’. Everyone knows about Him, but sadly, – most people don’t know Him. Even as He stands among us.

John has recorded these heavy words of Jesus. Everyone would do good to pay attention to them: “I have come into the world as light, so that whoever believes in me may not remain in darkness. […]

The one who rejects me and does not receive my words has a judge; the word that I have spoken will judge him on the last day.” “And this is the judgment: the light has come into the world, and people loved the darkness rather than the light because their works were evil.”

He stands among us. His Word is available to everyone is so many ways. In fact, people need to put in more efforts not to hear Jesus addressing them, than they need to open their hearts and to listen to His life-giving words.

But as Paul wrote: “In their case the god of this world has blinded their minds … to keep them from seeing the light of the gospel of the glory of Christ…” This is our sad situation here in Barossa as well.

“But to all who did receive him, who believed in his name, he gave the right to become children of God.” And this is what you are. Children of God. For us the words “He stands among you” sounds like a heavenly music.

For He knows how everything will end. He knows that when the Last Day comes, you, together with all His faithful people, will stand before His throne, and He will invite you in, to dwell with Him in everlasting joy and blessedness.

John the Baptist is there already, as is John the beloved disciple. As are multitudes and multitudes of God’s saints. And one day it will be our turn. But before that day comes, let us never grow weary to witness about the light. 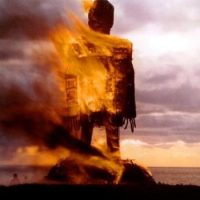